“People sometimes ask what it was got me started in music? “Dynamite.” I say without hesitation. “Yea, that tune in the early 1950’s by Little Miss Dynamite, Brenda Lee.” It’s absolutely true. First time I heard it on the radio, that was it: my 180 pivot point. I went immediately upstairs to my room, fished a dollar out of my paper route collection box and ran, no sprinted, downtown to the record store to buy the 45. I played that record to shreds in the weeks and months after. I spun it on our old RCA Victor Monaural so many times it must have driven my mother nuts! But, she never took it off the turntable. She either didn’t want to crush whatever was going on inside me or, she was grateful this obsession kept me occupied while she was pregnant and looking after a two and four year old. Whatever the case, it was “Dynamite” blasted the way to my musical career.

I bought my first guitar at a music store in Cleveland just after turning 16. The even toned Zim Gar classical with small-ish body and thin neck drained $35.00 from my bank account but was worth every penny. It even smelled good; a spicy raw mahogany scent wafting into my nostrils with every strum. To me, it sounded every bit as sweet as Peter Yarrow’s and Paul Stookey’s top-of-the-line classical guitars, too. Especially when sprawled in the back seat of momma’s ’64 Plymouth wagon with the windows rolled up figuring out Bob Dylan’s Blowin’ In The Wind, the first song I taught myself to play and sing.

Then came an infatuation with the 12 string and a [fortuitous] trade-up to the upright piano-like sound of a nice little Gibson B-25. [Oh, where for art thou?] This accompanied me through high school until forsaken for a beautiful blond…a dreadnaught Goya 12 string; the perfect match for a young man’s broadening palm and sinewy long fingers. Eventually, however, even this calliope of sound gave way to the guitar of all acoustical guitars, a Guild D-40 purchased in 1967 at a 2nd hand store in Philadelphia. To this day, this handsome instrument rests obediently on its bedside stand; awaiting repairs which will never come; still looking marvelous but, sadly, its days played out. Sorry, old friend, but nothing, not even me, lasts forever.

Hmm. That may not be entirely true. I mean, if anything has a chance to last forever it’s gotta’ be the sound of my Fender P-Bass. They say Rock and Roll will never die! Right! God knows I’ve played my share since 1957 so, maybe all those heavy bottom notes I twanged out there are still rollin’ along somewhere in space, actually gathering mass and volume instead of dissipating into the cosmos. Better plug your ears, folks ’cause when all that comes back around, it’s gonna’ sound like dynamite!” 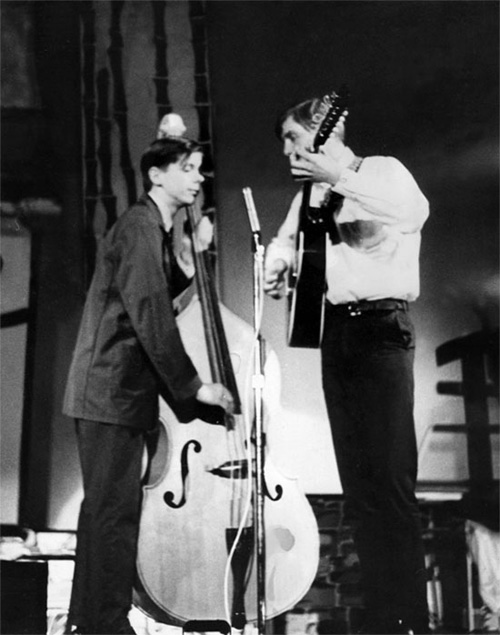